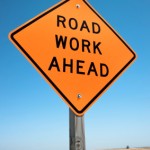 The  Minnesota Department of Transportation, Mn/DOT, recently completed the biggest project in its history: 3 ½ years and $288 million. And get this: It finished weeks early and was completed within 2% of original contract value.   I visited the project manager, Steve Barrett, a couple of months ago and he showed me around the project site and answered questions I had about how Mn/DOT manages projects.  I wanted to see what project management looked like and how it worked on really big projects, and what better example of “uber” project management than the Interstate 35/Highway 62 exchange project in Minneapolis.

As we drove around the site and watched workers putting the finishing touches on some of the walls alongside the highway, I asked Steve what it was that enabled him to manage this project so successfully.  He indicated that it was the use of Critical Path Method techniques that allowed him to manage the project as effectively as he did.  We visited the project room with project Gantt chart plastered all over the walls (we’re talking about a lot of Gantt charts), and he explained that by knowing what was on the critical path and understanding where and how much float there was, he was able to put his energy into more aggressively managing the right project components and focus less on those things that weren’t as urgent.  Those tasks on the critical path were non-negotiable.  Slack or float available on non-critical path tasks was made available to project team members on a first-come, first-serve basis.

I’ve been teaching CPM techniques as part of my project management classes for years, but typically when I get to that section of the class my students’ eyes glaze over.   This very concrete example (no pun intended) has reinvigorated my interest in presenting CPM and it has certainly helped me sustain the interest of my students while we do forward and backward passes, identify the critical path and calculate float.

I’m not sure what I expected to find at Mn/DOT in the way of project management.  Something bigger and better than what most of us work with, perhaps.   It was a pleasant surprise to find someone managing Mn/DOT’s largest project using regular PM tools used by regular PMs.