A Sunny Debut For Spain

Watermark Learning was founded in 1992. Besides our founding, a lot was going on that year. Here are some noted firsts and other happenings in July of 1992. 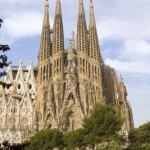 Try as we might, we could find no significant technological advancements or inventions that occurred in July 1992! Perhaps the biggest news of that month was the opening of the 1992 Summer Olympics in Barcelona, Spain. This sunny and memorable event marked the first time Spain had ever hosted the Olympics games.

July 31 – The ex-Soviet Republic of Georgia becomes the 179th member of the United Nations.