It’s been a few weeks since Elizabeth and I visited New Zealand, with a July 4 holiday in the middle. I’m finally getting a chance to finish my blog about the second half of our trip.

After having business meetings with Equinox, our New Zealand partner, and doing presentations to two groups, it was time to start teaching. Elizabeth presented our class on Influencing without Authority. Her open-enrollment class had a mix of industries represented. Since the class was in Wellington, New Zealand’s capital, there were many government workers attending, including the New Zealand Defence Force. 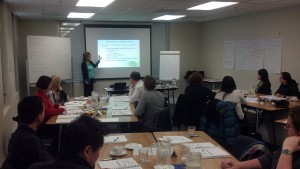 Elizabeth commented that the attendees were very interested in learning about influence, especially the government workers who often have to deal with hierarchies and bureaucracies. Much of the valuable learning took place when the class had break-out sessions and small group discussions. “People in class felt very ‘safe’ right way about sharing their experiences,” Elizabeth said. “They really got into the discussions at their tables and learned quite a bit from each other during the exercises.”

I stopped in during lunch and met some of the class members and took a few photos like the one above. It was fun to talk to people who attended.

I taught a CBAP Certification review class while we were there. It had a few students from one of Equinox’s best clients, and we spent a productive day covering areas they wanted to focus on, including their application. One of the students took her exam last week and I’m happy to report she passed! She was quite thrilled, of course.

New Zealand is remarkable in that the country has the 4th–highest number of CBAPs world-wide. Considering how small a country it is (less than 5 million people), they have the largest number of CBAPs per capita of any country (0.00000955; by contrast, the US has 0.00000338, Canada has 0.00000899, and Australia has 0.00000253 CBAPs per capita. Note – these are my calculations and not official ones.). New Zealand BAs – you should be proud of what you have accomplished!

Both Elizabeth and I felt right at home in our classes, and remarked how similar it was to our North American classes, with students encountering many of similar project issues . We had assumed that would be the case, but it was tremendous to be able to interact with business analysts and project managers from halfway around the world as if they were in our home town. Except for our different accents, that is – I felt a little embarrassed having to ask people to repeat themselves. 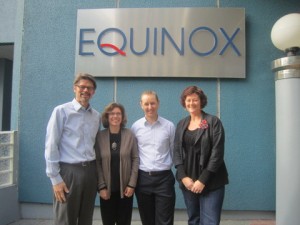 We’re already planning our trip next year to meet with our partners at Equinox and their customers. We would love to attend and speak at the BA Development Day in 2013 in Wellington.