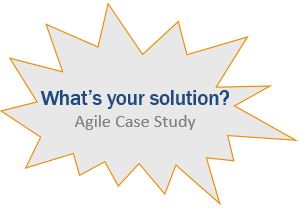 The sun is sinking lower in the sky as you walk to your car after a long day at Bigshot Games, a producer of video slot machine software located just outside of Las Vegas, NV.  As you watch the sun descend lower in the sky, you can’t help but see it as a symbol of your Team’s sinking Agile adoption.

The Team that you serve, “Beginner’s Luck”, made the transition to an Agile method approximately two months ago by selecting Scrum.  Following an Agile Boot Camp that detailed the specifics of the method, the Team established a number of roles and began executing two-week sprints.  Throughout your eight sprints together, a number of issues have arisen that are making you think that the Team’s luck may have run out.

First, the Team is struggling to get to a potentially releasable product increment each sprint.  While everyone is busy during the sprint, it just seems like there isn’t enough time within a two-week to get everything “Done”.  Some members of the Team have mentioned that extending the sprint to three-weeks might help complete all of the testing so that you could actually release, but you are unsure as to what to do.

Part of the problem may be the Team’s Product Backlog.  The Team struggles in every Sprint Planning meeting to understand each of the Product Backlog Items.  Some of them are incredibly large causing the Team to spend an inordinate amount of time during Planning understanding and breaking them down.  You have spoken to the Team’s Product Owner, Sonny, about helping the Team out by reviewing the Backlog prior to Sprint Planning, but he stated, “I just don’t have any more time to devote to developing this system.  I’m stretched as it is, besides, I don’t know enough about this area of the business.”

One of the business analysts on the Team has been attempting to help Sonny in fulfilling his role, but has not been very successful.  The Team doesn’t seem to be respecting June’s opinion often commenting, “June – the Product Owner owns the Product Backlog” or “That’s great June, but you don’t understand how the system works”.

June has really made an effort to work in a cross-functional way since the Team made the move to Scrum.  She has been offering to not only assist Sonny, but also help out with testing and even expressed interest in learning how to write SQL.  Most of these efforts have been rebuffed as a number of the Team members claim that June simply doesn’t have the skills necessary to assist or state, “Having you help will just slow me down”.

As you settle in your car for your commute home and survey the Las Vegas skyline glistening against the fading sun, you ponder what, if anything, can be done to help the “Beginner’s Luck” Team.

Post a comment with your solution and see Mike’s response!
Your name will then be put in a drawing to win a $50 Visa gift card.
Deadline to enter: November 30, 2015

10 thoughts on “Beginner’s Luck: The Last Shot at Bigshot? An Agile Case Study”