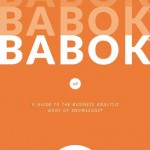 Most people in the BA field know that the IIBA® has produced an important update to its definitive Business Analysis Body of Knowledge, the BABOK® Guide. Released in April 2015, the BABOK Version 3 Guide includes major upgrades, ranging from the BA Core Concept Model™ (BACCM), to changes in most Knowledge Areas, the addition of 16 new techniques, and the addition of an all-new section containing five perspectives on Business Analysis.

Most comparisons of the two versions cover the major changes and ours is no different. However, we begin with the familiar aspects of version 2 and how they change in BABOK version 3. Then we will present the two major additions: the BACCM and the Perspectives.

Check out the full articles on the BA Times and leave your thoughts.

How much of a change does this new Body of Knowledge bring? How do you like it? What don’t you like?