Courage in Being the Second Mouse 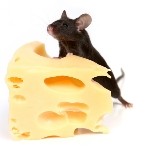 I read a funny quote the other day, actually a list of Paraprosdokians that my friend Hal Korff sent. (Thanks, Hal.) It goes like this:

“The early bird may get the worm, but the second mouse gets the cheese.”

It’s a funny line, but I got to thinking about the subject of courage, a topic that has been on my mind lately. After finishing our book The Influencing Formula, I find myself spotting examples of the formula, or parts of it, namely [trust + preparation * courage]. It’s not a mathematical formula, for sure, so please don’t try and do any algebra with it!

Instead, the formula reminds us we need all three components to be influential in our jobs, whatever they may be. My partner Elizabeth and I focus on business analysis and project management training, so we see influencing opportunities on projects. A classic example is when we are asked to implement a project which might be “jumping to a solution,” we can work to influence business leaders to do a business case. Or, we can make sure all the root causes of the current situation and current-state requirements are understood, so the solution is configured appropriately.

But, how do we go about doing that? If we appear to be roadblocks, our colleagues and stakeholders might not think we are “team players” and our careers could be threatened. Our answer to that is you need the trust of the people you are trying to influence, and also to do your background work to understand the current situation and context thoroughly. But, it doesn’t end there. We won’t be influential without showing the courage to make your proposal.

That brings me back to the mouse and the cheese. Courage is not jumping out in front of oncoming arrows like Braveheart. It is more like the character Lionel Logue in the movie The King’s Speech. (Did you notice I like movies?) He is a great movie example of courage in action, and if you haven’t seen it you should. It’s one of Elizabeth’s and my all-time favorites.

Logue was courageous in real life with King George VI of England, who had a speech impediment. Without going into too much detail, Logue, a commoner, showed tremendous courage with the King and helped him control his stuttering enough to deliver the most important speech of his life.

Logue wasn’t the first therapist who tried to help the King, and who knows what would have happened if he had been. After trying and failing with many other therapists, the King slowly became receptive to Logue’s methods. It wasn’t easy, though, and if you have seen the movie you know it also took much preparation and trust-building to succeed.

The point I’m trying to make is this: be aware of the context in which you are trying to be influential, and how many other “mice” have tried and failed to get the “cheese.” Sometimes it is best to bide your time, building trust and credibility, and save your courage for those situations when the “influencees” are more receptive. By being the second mouse, you will more often succeed in getting the cheese and being influential.

2 thoughts on “Courage in Being the Second Mouse”