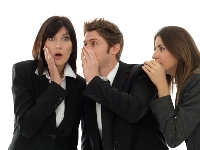 Communications is, of course, the single biggest indicator of project success or failure.  As project managers, we have to think about all aspects of communications, including how much, to whom, in what format, etc.  We also get pretty savvy at knowing which communication channels to use.

A lot of project work gets done through informal, undocumented communication channels.  This is not only OK, it’s actually necessary.  Imagine if every conversation or information gathering effort we conducted required a documented plan.  The fact is a lot of good data can be mined from the water cooler and coffee klatch gatherings.

There are two types of this informal network: the grapevine and the rumor mill. I would suggest that while both are informal, undocumented communication channels and that they may include many, if not most, of the same people, they are significantly different.  The grapevine is an asset worth using; the rumor mill is something to avoid.

How are they different and what makes one an essential part of a project manager’s communication strategy and the other a liability?  In my mind, it comes down to content and effect.

First, the nature of the content is qualitatively different between the two channels.  On the grapevine, information is  rooted in truth.  It may not include the whole story, but the information available is fundamentally true.  It is often a great source of information about prevailing attitudes, for example.  A project manager might tap into the grapevine to find out how people are responding to an organizational change of some kind.

In addition, grapevine content is generally not specifically about individuals.  The vine is more about ideas and things, and less about who did or said what.

Content on the rumor mill, on the other hand, is highly specious.  Often the information obtained from the mill is patently false or so distorted by innuendo or editorializing as to be of little value. Of course, it’s not presented that way.  In fact, you can usually tell if you’re tapping into the rumor mill by a qualifying comment such as “My brother’s roommate’s cousin heard….”  The qualification serves the purpose creating distance between the information and the person spreading it; it’s a way of deflecting ownership for the information.

Still, it’s not always crystal clear as to which channel you are using based on content alone.  Effect is also important to consider in order to distinguish between the vine and the mill.

The effect of the grapevine is positive (or at least not negative).  Use of the vine results in shared perceptions, level setting, or improved understanding.  The effect is not damaging or demeaning to others. When you are working the grapevine, you don’t feel uncomfortable about getting the information.  Grapevine conversations don’t inspire ducking into empty conference rooms to avoid being seen.  You come away from a grapevine conversation feeling like you could share what you learned with others without feeling like you violated a confidence or compromised anyone’s integrity.  You are comfortable with your name being associated with grapevine information.

On the other hand, the effect of the rumor mill is generally negative.  The purpose is really to provide cheap entertainment.  It’s the “You’re not gonna believe what I heard” factor.  When you are grinding on the rumor mill, you may look behind you or over your shoulder to see if anyone sees you.  These are the conversations that make you want to find an empty conference room or somewhere to avoid being seen.  Rather than about ideas or things, the rumor mill is almost always about people, and it’s generally not flattering.  The effect is usually that someone is shamed or demeaned or at least presented in an unfavorable light.