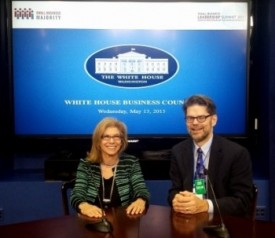 We were fortunate to be invited to the Small Business Majority’s inaugural Leadership Summit in Washington DC recently. Because of our previous efforts on behalf of the group, we were asked to attend along with 100 other small business leaders from across the country. The conference focused on entrepreneurship and provided us a chance to learn from national experts and to network with fellow entrepreneurs from a variety of business and industries. We found a great deal in common amongst the small business owners we met, regardless of the type of business they were in or for how long.

The event gave us access to speakers and panelists on capital acquisition, taxation, technology, and several current issues important to entrepreneurs. Some highlights include:

In between our breakout sessions, we heard from several government officials who discussed small business issues with us. Among them were:

Being that we were more or the less the representatives to the Summit from Minnesota, the two of us were privileged to meet separately with Senator Klobuchar (above right). Since we are also “political junkies,” the short time with her was a memorable experience. 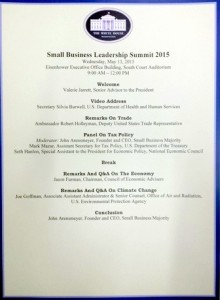 The Leadership Summit was a wonderful experience for the both of us, one in which we learned a great deal and from which we will benefit. Our aim is to use what we learned to keep improving and growing our company in the years ahead. We were also inspired to mentor new entrepreneurs and share our experiences accumulated in 20+ years in business. We hope the Small Business Majority will be an outlet to let us “give back” to the community and help other small business owners succeed.