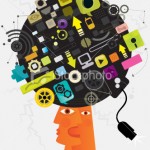 During the Q and A following my recent webinar, Offsite and On Board, most questions pertained to challenges around people multitasking during conference calls and online meetings. Evidence of people multitasking during virtual meetings includes the tap-tap-tap of keyboarding, silence when asking for input from someone, and the steady drip of “Could you repeat that please?” from attendees.

I have good news and bad news to consider before exploring possible strategies for dealing with this ubiquitous problem.

First, the good news: Those of you who struggle with virtual team members multitasking during conference calls and online meetings can stop worrying about it because… they aren’t.

That’s right. There is no multitasking going on in any of our brains. We simply are not wired to do it. There is ample research to prove this, yet we continue to delude ourselves into thinking we can intellectually process two things at once.

There are, however, two things we can do that make us think we can multitask:

First, we can switch back and forth really fast between two things that occupy the executive system of our brain’s frontal lobe, the part that handles decision making, reasoning, and other complex intellectual activities. (By the way, this part of our brain doesn’t fully mature until into the 20s.) Even though we can do this with terrific speed, it’s highly inefficient, and the fact remains that we cannot process two things at once using that part of the brain.

Second, we can do two things at once using two different parts of the brain. We can use the frontal lobe for decision making or planning while simultaneously doing something routine which will be handled by the basal ganglia in the temporal lobe. For example, I can stir a pot of spaghetti sauce while helping my fifth grader with his math homework because stirring spaghetti sauce is using my basal ganglia while the front part of my brain will be burning a hole through my eyelids trying to understand fifth grade math.

This inability to multitask is not a constraint unique to the intellectually less gifted. Even really bright people like students at MIT have been shown to be incapable of it. They think they can and will tell you just how well they do it. But they don’t. They can’t. Relieved?

Now the bad news:  While there are different types of attention and a variety of opinions about the actual number, most sources indicate that the average sustained attention span of an adult is about 40 minutes. Think about it. Your typical meeting agenda has about as much likelihood of sustaining people’s interest for the duration of the meeting as I do of being drafted into the NHL.

Many even suggest that our attention spans may have an inverse relationship with the pervasiveness of technology in our daily lives. As our digital world becomes increasingly one of instantaneous gratification, we have less and less need to practice the intellectual exercise of focusing. Given all the technology most of us are surrounded with, it seems logical that in a conference call or online meeting in which there is nothing to actually look at, 40 minutes might even be a considerable stretch.

Given that our capability of being great multi-taskers is a fantasy and that we have attention spans far shorter than what we regularly demand of ourselves, I’d suggest a couple of questions before exploring ways to deal with the problems multitasking cause:

“Who are we kidding?!  Why do we expect people to stay focused during a virtual meeting for more than 20 minutes?”

I can’t think about this anymore so that’s it for now.  Next time I’ll explore some strategies that may yield better attention and active participation from virtual meeting participants.

Until then, to all ye who fight the mighty multitaskers with stunted attention spans, I say: Be free from the frustration of having to compete for the attention of multitaskers and quit asking the impossible.