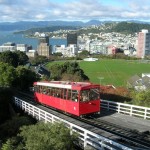 Elizabeth and I had the privilege of visiting New Zealand this past week. We met with our new partner there, Equinox IT; taught classes for them; and made two presentations in Wellington. It was a whirlwind trip that started off with a single day of sight-seeing before we got to work. Wellington is both New Zealand’s capital city and beautiful. It reminded us a bit of San Francisco with its rolling hills and architecture. They even have a cable car that locals say American tourists love to ride on. We were no exception! (Picture on right – view from the Wellington Botanical Garden.) 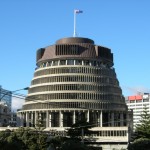 Left: part of the Parliament Building in Wellington known as the “beehive.”

We are told that Wellington probably has more business analysts per capita than any other New Zealand city; based on the interest level in the two events we participated in, it showed.  First was a “BA Think Tank” sponsored by our partner, Equinox. A dedicated group of BAs came out on a Monday evening to hear Elizabeth present “The Top Seven Trends in Business Analysis.” There was a lively discussion after the presentation. 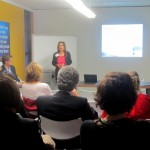 The trends that resonated most with the audience were: BA as Change Agent, the BA role separating from the PM role, and the BA role on Agile projects. Most agreed that business analysts were in the best position to act as change agents in organizations. The IIBA’s new emphasis on this role was also a welcome message.

Everyone was also happy to support the separation of the BA role from project management. There was general agreement that the two roles are good “checks and balances” and it is difficult to effectively play the two roles simultaneously. There are also different skill sets and aptitudes involved.

Most BAs in attendance did not currently work on Agile projects, but understood the concepts and context. The consensus was that the best BA role was to help the Product Owner groom the product backlog. We are happy to report that no one thought the BA should be the Product Owner or the Scrum Master. 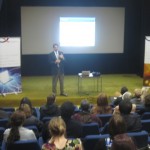 Next up was Rich’s presentation for a Wellington IIBA meeting. Rich took the audience through “Fantastic Voyage or Impossible Dream: The BA as Management Consultant.” People in the audience liked the concept, and it tied nicely into the Think Tank discussion about change agents by emphasizing the consulting nature of the BA role. Most people considered themselves in the “Order Taker” or “Influencer” role, with a few “Experts” in the crowd.

Many people mentioned how helpful the topic was to them. It reminds us that BA issues are much the same around the world! For a further look at the topic, see the blog post from our partner, Equinox.

In Part 2, look for our thoughts about training in New Zealand.