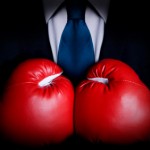 I think people like a good fight. Certainly the media seems to, not only in the world of politics, but also in the worlds of sports and entertainment to name a few. In the world of business analysis, the current fight seems to pit Agile methods against the Waterfall approach. For the next several blogs we’ll have a Scrum vs. Waterfall match. In corner #1, representing the Agile methods, we have the Scrum framework. In corner #2, representing Waterfall, we have the “traditionalists.”

For years we have used use relative size estimates on traditional projects. I have found this most effective when actuals have been collected over enough time to have confidence in the numbers. While I have only used relative sizing on projects and deliverables (such as a small, medium, or large report), I know of teams that have used them on phases and tasks as well. As with Scrum, we usually base traditional relative sizes on complexity, effort, and doubt (risk).

Round 1—Scrum wins, but it’s not a knock-out.

In my experience using relative sizes on traditional projects is often done to short-change the planning process. With Scrum the relative size of the user story actually gets refined as it approaches the sprint in which it gets delivered. While some traditional teams have the discipline to refine the estimates (as a project manager I always encouraged it), many more give in to management’s pushback about not changing the date, scope, or cost. Scrum processes, by their nature, encourage change and refinement; traditional processes do not.

Planning Poker uses a kind of Delphi technique to reach consensus on the relative size of the user stories. Each person on the delivery team (not the Product Owner) is given a deck of cards, each card with a number. For example, if using the Fibonacci scale, the deck would have cards, each containing a number in the scale (1,2,3,5,8,13,21, etc.) going as high as desired. The Product Owner explains the details of the user story and at the count of three team members turn over the card with the points they think most appropriate. For example, two team members have turned over a 3, one a 5, two an eight, and one a 21. They discuss their reasons for “playing” their cards. Then at the count of three they turn over a card, the same or different from last time. Again, they explain their rationale. This process continues until consensus is reached.

The Delphi technique involves a group of experts providing their estimates anonymously. Like Planning Poker, there are rounds. Although this can be done electronically, the experts usually write their estimates on a piece of paper.  A neutral party takes the estimates, shuffles them, and reveals them to everyone at the same time. No discussion is supposed to occur. For the next round and based on seeing the estimates of the others, each expert provides a written estimate which can be the same or different from the previous round. The process continues until consensus is reached.

On traditional projects I have tried using Delphi anonymously only once. It didn’t work. I have found the power of Delphi is in the discussion of each person’s assumptions about the estimates.

Round 2—Scrum wins, but again it’s not a knock-out. I love the Delphi technique. I love having the team reach consensus on estimates, whether traditionally or through Planning Poker. It provides team accountability for the estimate, and increases the chance of team and individual commitment rather than compliance. So what difference does it make whether traditional Delphi or planning poker is used? Everyone can understand Planning Poker. I have seen teams take to this technique immediately. But while Scrum makes things easy and practical, the traditional Delphi feels arcane. In addition, the traditional approach has some points taken off for having to use experts and for the required anonymity.

So, the current score is two zip. But the match is not over. Much more to come…