In my continuing coverage of BABOK® techniques, I plan to comment on all of the general and task-specific techniques. This week’s entry is about state diagrams, a fairly specific technique you may not be familiar with, but could be a source of CBAP® exam questions. It’s also a practical tool. Hopefully my word puzzle on the right makes sense. Minnesota is a state, plus the word diagram = State Diagram. (Hokey, I know.) 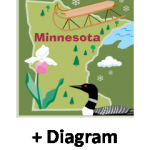 I’m giving a presentation at an upcoming conference called “BA Toolkit: Essential Tools for an Agile Project (or any other for that matter.)” I’m basing the presentation on a recent project that built our CBAP Online Study Exam. One of the tools I used on that project was the State Diagram. The BABOK® notes that these diagrams go by different names such as State Machine Diagram, State Transition Diagram, and Entity Life Cycle Diagram.

It proved helpful for a number of reasons:

Here is an example state diagram. It shows 1) Five example states for a Human Resources application, 2) Transitions that reflect the business process in moving from state to state, 3) The event or trigger that causes a move to a new state, and 4) Activities that can take place upon entering or exiting a given state.

To sum up, State Diagrams show the various states which an entity or class flows through during its lifetime (i.e., from creation to deletion). It also shows the events or triggers that prompt from one state to another, and formally labels the transitions. This type of analysis would normally be done only for complex entities that have multiple states or “life cycles.” They can help discover missing data attributes and processes involved in the various transitions.

You don’t need to be a proponent of UML or a specific methodology such as Object Oriented Analysis and Design to use these. They have value for most IT projects, and can help uncover missing requirements quickly. You might also get asked a question on the CBAP® exam, so add studying it to your preparation!

For more information, check out Wikipedia’s page on state diagrams. Make sure to scroll past the obscure entries like the “Directed graph“ and “Mealy machine.” We also cover state diagrams in our Business Process Modeling class and Data Modeling class.