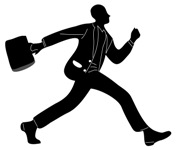 I heard this from a project team member in a training class recently.  He was referring to the schedules for the projects he works on.  What he was getting at was that the team really doesn’t have a chance from the get-go.  They are behind on projects before they even begin, and it doesn’t take long for that to be evident.

Why do we do this to ourselves?

Project managers know they should be getting input from the team on planning and the estimates for their work.  And they often do.  It’s what happens after that that’s problematic – namely, the input is ignored.

Why would we ignore the team, the people who know what it takes to get the work done?  Often because the answer they give is not what the customer or some other stakeholder wants to hear.

But who wins in this scenario?

The customer may think they do, but the team can only do so much, and if the project is late, the customer really isn’t getting what they want.

The team surely doesn’t win.  And it only takes them until day 2 to realize that they’re going to lose!

If we ask someone a question, let’s ask because we really want to know the answer.  If we ask the team how long it’s going to take to get it done, let’s make sure we are willing to use the information we get, even if the answer isn’t what other stakeholders think they want to hear.

All stakeholders should have a reasonable chance of looking good past day 1.