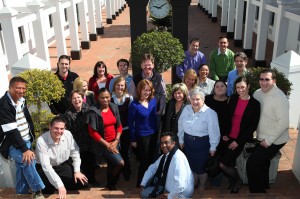 I’m posting this late, mainly due to challenges in Internet access, and being super busy on our trip to South Africa. I wrote some entries on the plane ride back home.

Our first classes in South Africa got underway Aug. 3. The students – delegates as they are called here – were very similar to those in the US. It’s refreshing to work with like-minded people from such a distance away. It reminds me that business in general and business analysis in particular around the world are quite similar. The biggest difference I noticed was our various accents. I’m sure mine made me hard to understand at times like I found some of theirs. The more Afrikaans-influenced inflections were harder for me to understand than the British-oriented ones. My hearing isn’t what it used to be, so that didn’t help!

Our CBAP Prep class students posed with me outside the class. It was only the first day, so they were still smiling (just kidding – it was fun the whole time).

South Africa is a cultural melting pot, much like the US. There are 9 different national languages, with the Zulu and Xhosa being the dominant ones. Add to that the descendants of the British, Dutch (Afrikaans), and Indians, you have a varied mix that works. The government is currently run by a Zulu, but the tribe seems secondary to the political party, the ANC – African National Congress, which Nelson Mandela was the head of. 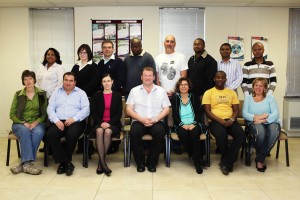 Back to training. Another difference we noticed is that the environment seemed a bit more formal than in the US.  Our host, FTI, routinely takes class photos on the first day and plans to post them in their training facility. Check out the formal shot of Elizabeth’s BA Fundamentals class. Not sure we’d ever do this for our classes, but it was a fun way to start.