Four Tips for Avoiding Conflict Between the PM and BA 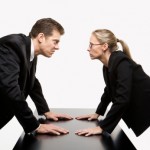 At a recent conference I sat next to a project manager who observed, “My organization hired a new consulting company to do business analysis work. They’ve completely taken over. Now they do a lot of the project management work that I used to do, such as meeting with the sponsor to uncover the business problems, determining what we’re going to do on the project…I can’t believe it! I feel like I’m being treated like a second-class citizen!”

While this complaint pointed out some organizational issues, it also got me thinking about the role of the Project Manager (PM) and the Business Analyst (BA) in the early stages of a project. The two bodies of knowledge, the BABOK® Guide 2.0 and PMBOK® Guide – Fourth Edition each allude to work being done at the beginning of the project, so it is not surprising that conflict between these two roles can arise.

It’s easy for me to say that spelling out roles and responsibilities helps avoid this conflict. Using a responsibility assignment matrix, such as a RACI, is helpful, but it may not be enough. Looking back it seems to me that as both a BA and a PM, I never spent a lot of time dwelling on this issue. When I was a BA I didn’t have a project manager, so in a sense I was able to avoid conflict. When I became a PM, I was extremely fortunate to work with strong BAs who took initiative to define their own roles. Below I have listed what worked for us and why.

We worked on a project which had both business and technical complexity. We were introducing many new business processes as well as new technology. The project affected many business units within the organization, and the risk was high. Below are a few of the factors that I believe contributed to a smooth relationship between the BA and me (PM), and ultimately to a very successful project:

I completely trusted the BA. But the whole topic trust is the topic for different blog on another day.