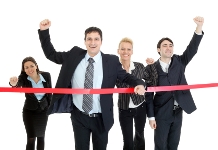 I ran my first triathlon this past summer.  My biggest concern going into the race was how I was going to hold up toward the end.  Running is the last of the three events, and the one about which I was least confident.  I wondered if I would be able to finish that last mile or if I would simply be so exhausted that I would not make it across the finish line.  As it turns out, I was so invigorated by the experience and so excited about completing the race that the closer I got, the easier it actually became as I moved toward the finish line.

If only it were that way with projects. Often, it’s the opposite with projects: our momentum peters out toward the end.  In fact, sometimes it feels like the finish line moves further from us the closer to the end we get. Starting projects seems relatively easy. It’s bringing them to a close that can be frustratingly elusive.

Yet, this is what makes a project a project, right?  It’s got a beginning and an end.  By definition, they need to come to an end so we can stop spending organizational resources on it and focus on other priorities.

First, make sure you know what the project finish line looks like.
What kept me going in my training and in the race was imagining myself crossing that finish line.  The finish on a project, of course, isn’t an actual line in the sand, but it should be clear to all stakeholders what “done” looks like.  Part of the reason we sometimes have a hard time getting to the end on projects is that we don’t recognize it when we see it.  Define it clearly; define it early.  And use it to visualize the end – just like a real finish line.

Second, measure progress regularly.
Training for a race is easy in that you can hop on a treadmill and gauge how far and how fast you are running.  As your endurance increases, your confidence and momentum toward the goal of completing the race increases.

It’s not exactly that way on a project, but taking stock regularly along the way to know how you are doing relative to the objectives helps keep the “mo” on projects.  If at all possible, measure progress and let everyone know where things are at.  It’s usually not enough to just announce “done” at the end.  Nothing is more encouraging than hearing “we’re getting there” along the way.

Third, find a mentor.
Plenty of days during training I could have found something more desirable to do than swim, bike, or run.  Like laundry.  But I have a friend who had done this before and who always provided the right amount of support and encouragement when I was feeling uninspired.  Sharing my success with him was a treat.

Mentorship in project management can be every bit as powerful. Someone who has been there and done that and who will be sounding board as you work through obstacles to keep your eye on the prize can be a project manager’s greatest asset.

Project closure is as fundamental to project management as running is to a triathlon. Visualizing the finish, regularly measuring the progress, and working with a mentor can help you achieve both.